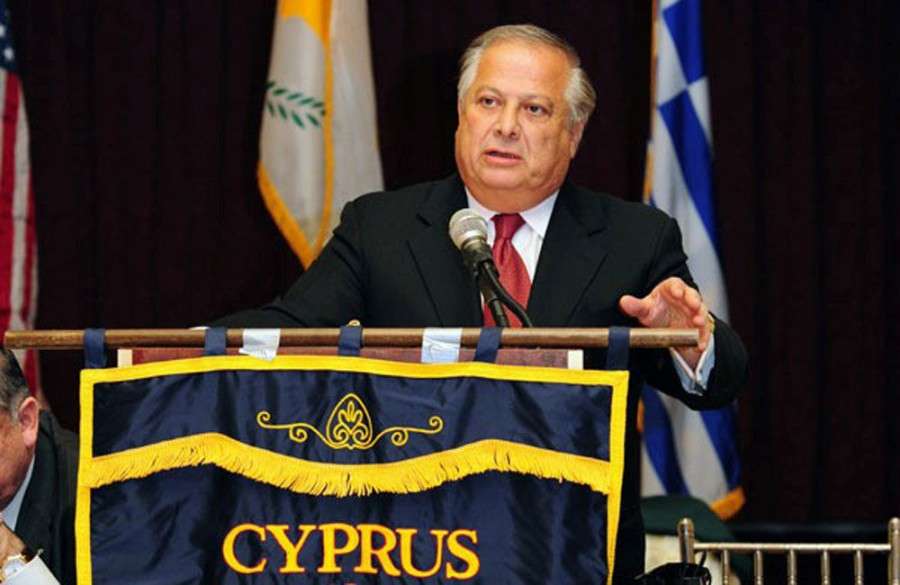 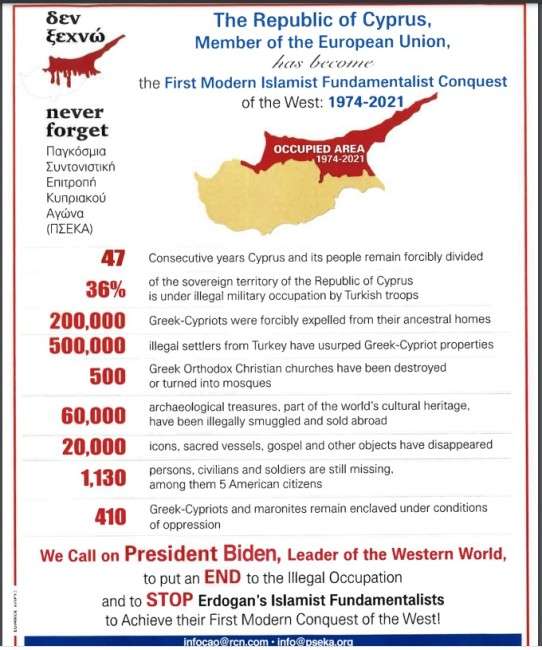 Throughout the history of the Cyprus problem, Turkish rhetoric and propaganda were based on a well-orchestrated distortion of the facts with the aim of turning the truth upside down and creating an alibi for the Turkish aggressive, expansionist policy and for the 1974 Turkish invasion and occupation of the Republic of Cyprus which constitutes the root cause and the essence of the Cyprus problem.

Against this backdrop it would be useful to start with a brief historical background about how the Cyprus problem was created.

In 1958, following the national liberation movement, Archbishop Makarios, accepted a solution of independence, whose basic premises had been elaborated in Zurich by the Governments of Greece and Turkey. Due to its divisionist elements, it was characterized as a "fettered independence."

Posts filled by appointment and promotion, such as in the civil service and police, were to be shared between Greeks and Turks at a ratio of 70:30. In the army,this ratio was 60:40. The President was designated Greek and the Vice President Turkish, each elected by their respective community. The Turkish Vice President could block the decisions of the President exercising a veto right whereas in the House of Representatives fiscal, municipal and electoral legislation required separate majorities.

The Turkish-Cypriot leadership with the incitement of Turkey, made full use of these constitutional provisions to block decisions of the government and render the administration of the young Republic difficult and inefficient.

In 1963, after the Turkish members of the House of Representatives had rejected the budget causing constitutional crisis, President Makarios decided to submit to the TurkishCypriot Vice President for consideration a number of proposals for constitutional amendment aimed at addressing certain causes of friction impeding the smooth functioning of the state.

A large number of Turkish-Cypriots settled into enclaves, as a result of the efforts of Turkey and their nationalist leadership to enforce a de facto partition of the island. For the same reason, members of the Turkish-Cypriot community who stood for cooperation between the two communities were targeted and murdered.

The United Nations Security Council, in Resolution 186 (1964), at the request of President Makarios, established the United Nations Peacekeeping Force in Cyprus (UNFICYP) with the mandate to contribute to the restoration and maintenance of law and order and to facilitate the return to normal conditions in Cyprus.

Turkey's policy of fostering tension and segregation continued in the following years. Turkey imposed its partitionist plans against Cyprus using as a pretext the coup of the Athens military junta on July 15, 1974 against the elected government of President Makarios.

On July 20, 1974 the Turkish armed forces launched a full scale military invasion against Cyprus, which led to the occupation of more than 36% of the territory of the Republic and the forced eviction of the Greek-Cypriot rightful owners from their ancestral homes in violation of all rules of international legality, and of the UN Charter.

By the end of the following year, almost all Turkish-Cypriots living in the areas under the control of the Government of the Republic of Cyprus had been forced to relocate to the occupied part as a result of the threats of Turkey to proceed with new fait accomplis, if its demand in this regard was not met.

Therefore, Ankara realized its long-time plans of national separation of the two communities and the partition of Cyprus. Negotiations for the settlement of the Cyprus problem have been conducted since 1975 under the auspices of the UN, on the basis of the relevant Security Council resolutions as well as two High-Level Agreements.

The first Agreement which was signed in 1977 by President Archbishop Makarios and Turkish-Cypriot leader Rauf Denktas provided that the aim was to establish an independent, bizonal, bicommunal federation with a central government, which would have such einforced powers so as to ensure the unity of the country.

The second High-Level Agreement concluded in 1979 between President Spyros Kyprianou and Rauf Denktas, additionally provided for respect for human rights and fundamental freedoms, demilitarization as well as satisfactory guarantees for the independence and territorial integrity of the Republic. It also provided for priority to be given to the issue of the return of Varosha to its lawful inhabitants.

On November 15, 1983, Turkey and its occupation regime unilaterally declared the so-called "Turkish republic of northern Cyprus," an act which was condemned by the international community as legally invalid. In particular, the United Nations Security Council, in Resolution 541 (1983), rebuked this declaration, declared it legally invalid, and called for its reversal.

The Security Council called on all states to respect the sovereignty, independence, territorial integrity, and nonalignment of the Republic of Cyprus and not to recognize any Cypriot state other than the Republic of Cyprus. Seriously concerned by the further separatist actions in the occupied part of the Republic of Cyprus, in violation of Resolution 541 (1983), such as the so- called exchange of ambassadors between Turkey and the legally invalid entity and the planned conduct of a "constitutional referendum" and "elections," as well as the threats of illegal settlement of Varosha and other actions aimed at further consolidating the division of Cyprus the Security Council adopted Resolution 550 (1984) reaffirming Resolution 541 (1983) and reiterated its call on all states not to recognize the entity established by the separatist actions and at the same time called on them not to facilitate or in any way assist the separatist entity.

At the same time, the Security Council described as unacceptable the attempts for the settlement of any part of Varosha by any persons other than its legal residents and called for the transfer of the area under the United Nations administration.

Throughout the years, subsequent governments of the Republic of Cyprus exerted every effort for a solution of the Cyprus problem which were unfortunately blocked by Turkey's intransigent stance.

In 2004, against the backdrop of the prolonged stalemate and the ineffectiveness of many rounds of negotiations for a solution to the Cyprus problem, UN Secretary-General Kofi Annan was authorized to exercise his discretion to finalize the text of a comprehensive plan for a solution, which was subsequently called the Annan Plan.

This methodology eventually proved to be a counter incentive for substantive negotiations and led to the UN Secretary-General's arbitration for the finalization of a plan on March 31, 2004. On April 24, 2004, separate referendums were held in both communities. With a percentage of 64.9, the Turkish-Cypriots approved the plan whereas the GreekCypriots rejected it with a majority of 75.8%. these numbers evidently portray the overwhelming feeling among the GreekCypriots that the proposed plan was not a balanced and decent compromise and largely lagged behind in addressing the essence of the Cyprus problem which is to guarantee that the fate and the destiny of Cyprus will be deterrmined by its own people.

Despite this development the efforts for a solution continued and gained new impetus as a result of Cyprus accession to the European Union which could act catalytically in this regard bearing in mind Turkey's aspiration to become a member of the Union.

The renewed effort which commenced in 2008 culminated to the convening of a Conference for Cyprus inn June 2017, under the auspices of the UN Secretary-General Mr. Antonio Guterres in Crans-Montana, Switzerland. Unfortunately the Conference was concluded unsuccessfully due to Turkey's insistence on the permanent presence of military troops in Cyprus and on maintaining its interventionist rights after a solution to the Cyprus problem.

Despite this negative development, the Cypriot government remained steadfastly committed to reaching a solution to the Cyprus problem through negotiations under the auspices of the United Nations. Despite the non-constructive attitude of Turkey, the Secretary-General of the United Nations has appointed Jane Holl Lute as Special Adviser to resume the negotiation process. Successive rounds of contacts led to the meeting of the Secretary-General with the leaders of the two communities on November 25, 2019, in Berlin during which the leaders reaffirmed their commitment to reach a solution based on a bizonal and bicommunal federation with political equality, as defined in the relevant resolutions of the United Nations.

On April 27-29, 2021,the UN Secretary General convened the informal 5+UN meeting for Cyprus, in Geneva, with the aim to achieve a breakthrough for the resumption of a process of negotiations for a solution to the Cyprus problem. Unfortunately, the refusal of Turkey and of the leader of the Turkish Cypriot community to reaffirm their commitment to the agreed basis of a bi-zonal, bi-communal federation with political equality as defined in UN resolutions, their insistence on the equal status of the "two-states" as a precondition for the resumption of negotiations and their rejection of the Secretary-General's proposal for the appointment of a special envoy, led the effort to a deadlock. This approach was repeated during the meeting of the UN Secretary General with President Anastasiades and the leader of Turkish-Cypriot community Mr. Tatar in New York on September 27, 2021.

In addition, Turkey proceeded with the creation of new faits accomplis in the occupied areas of Cyprus, by proceeding with a new fait accomplis in the fenced off area of Varosha in violation Of the relevant UN Security Council resolutions.

These actions were condemned by the Security Council which issued a Presidential Statement on July 23, 2021, calling for the immediate reversal of all illegal actions and for full respect of the relevant UN resolutions including the transfer of Varosha to the administration of the United Nations.

These provocative actions on behalf of Turkey also aim at undermining the efforts of the UN Secretary General and the international community to create a conducive environment for the resumption of meaningful negotiations.

Despite the setback, the Republic of Cyprus maintains its commitment and decisiveness to continue and to enhance its effort until Turkey is persuaded to change course and to contribute to the solution of the Cyprus problem in line with international law and the principles upon which the European Union is founded. 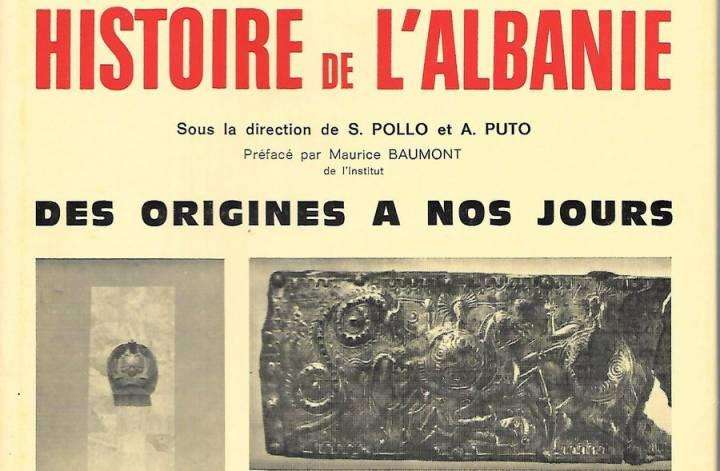 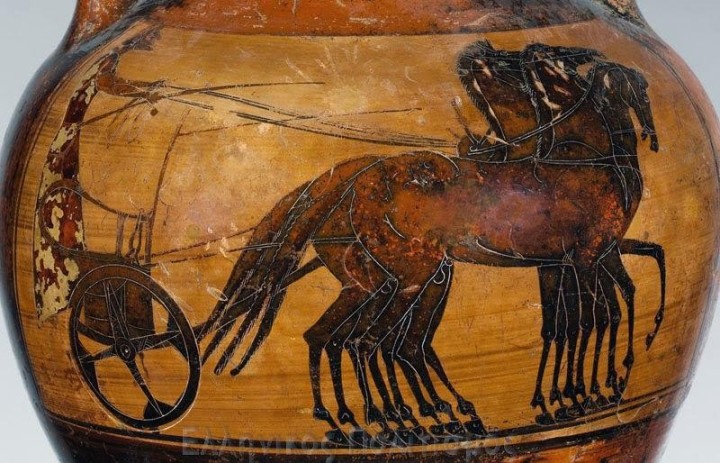